Willy Smoke is reader-supported. When you buy through links on our site, we may earn an affiliate commission.

This product – the marriage of an air fryer and a toaster oven – can cook anything from a pan of french fries to a whole chicken, without the guilt of a traditional deep-fryer.

This seven-function appliance utilizes high-powered hot air and convection fans to fry all your favorite foods, eliminating the need for oils high in fats and cholesterol.

In addition, Cuisinart’s Toaster Oven Air Fryer can bake, broil, warm, and toast faster than your traditional oven, right from the kitchen counter. 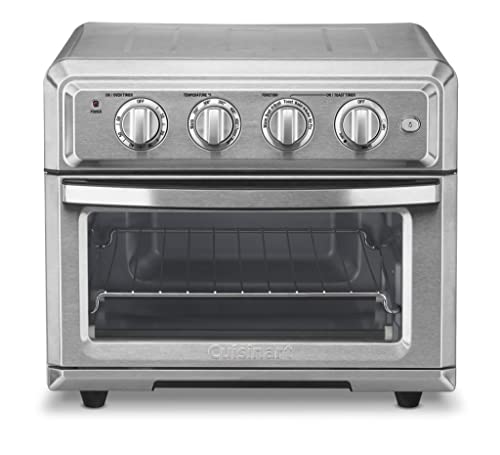 That’s large enough to fit up to six slices of bread, three pounds of chicken wings, a 12-inch pizza, or a four pound chicken.

This makes it one of the larger air fryers available on the market, and while it may take up a bit of counter space, it could also replace your toaster or microwave.

The interior contains two racks and a tray for catching stray crumbs. It comes with a frying basket, a baking tray and an oven rack to fit inside, with replacements available to purchase.

There are four dials on the face of the oven – a timer, temperature control, function, and a shade-selector for the toasting function.

The air fryer acts as the centerpiece of this appliance. Simply using heat and a high speed fan, foods can have that classic deep-fried effect without the use of heavy oils.

An air fryer works similarly to a convection oven; a fan helps the hot air circulate, which ensures an even distribution of heat over the entire product. Just by adding a fan, food is cooked more thoroughly in a shorter period of time.

The main difference between a convection oven and an air fryer is that a fryer runs at a hotter temperature, and in a more condensed space, than a traditional oven.

The result is similar to a deep fried product – except no harmful oils have seeped into the food. With air frying, foods are lower in fat, lower in cholesterol, and healthier for the heart.

That being said, an air fryer can only crisp food. It cannot mimic the taste of food that’s been sitting in oils, nor can it truly be as crispy as deep fried food. It also takes longer than traditional frying methods.

The TOA-60 can reach temperatures of 450 degrees using four heating elements from above and two from below; the extra two from above allow for the air fry function. Then, when it’s time to remove the food, the fryer will automatically shut off when you open the door.

First time users of this product will have to keep in mind how efficient this air fryer is, though.

Many reviews say there’s a learning curve to this product, and even the appliance manual suggests setting the temperature 25 to 50 degrees below other recommendations.

The manual also contains a chart to help determine the proper temperature and cooking times for the air fryer.

The air fryer function is a great option for those who love fried foods, but hate the consequences that go along with them. Oils used in frying are high in fat and bad cholesterol, which can lead to complications like high blood pressure and heart disease.

As heart disease is the number one cause of death in America, people all across the country are cutting their cholesterol in favor of their heart. This air fryer can help satiate that desire for greasy foods by giving food that same crunchy taste.

In fact, users report that it can make frozen foods taste better than cooking them in the oven.

So whether you have a health issue that’s forcing you to cut the fat, or you’re just trying to shed a few pounds, the TOA-60 is a great option for your kitchen.

Not to mention, this air fryer option is much safer than keeping a basket of hot oil in your kitchen.

While the air fryer is a new and unique product, it’s probably not a necessity in your kitchen. What is a necessity, likely, is a toaster, or an oven, or a way to warm up your leftovers.

The TOA-60 can do all of the above with its seven different baking, broiling and toasting functions. This would make it a handy tool for any avid cooker, as it can help you to cook many dishes at once with it’s two interior racks and its convection system.

It’s multifunctionality also helps justify the size of the appliance– it may take up a lot of space on your counter, but it can also be a toaster, a microwave, or a small oven, so it could eliminate the need for those smaller kitchen appliances altogether.

Another great part about multifunctionality is that you get more bang for your buck. The TOA-60 is already priced similarly to other air fryers on the market, but those products don’t have the extra functions of this product.

Another pro to this appliance are the high cooking speeds. With the temperatures of the air fryer and the high speed fan, food is cooked at much higher speeds than with a conventional oven.

Toaster ovens often cook fast, but the TOA-60 is an exceptional example of such speed. If you have a busy schedule, this product could help you prepare fulfilling and nutritious meals without taking too much time out of your day.

If you’re a lover of frozen foods, the cooking functionality of the TOA-60 can both thaw and cook your frozen foods faster than ever before. Ultimately, there aren’t many other appliances with this sort of efficiency.

While many TOA-60 users love it’s speed, there is undeniably a learning curve with this product. The condensed space of the oven, in combination with its extra heating elements, seems to affect functionalities other than the air fryer.

Many buyers suggested watching your food closely, at first, or you’ll likely burn the food. Others said they never got over that learning curve, and thus can’t enjoy the product.

The user manual seems to acknowledge these shortcomings by including a chart and temperature tips, but there could be other issues involved.

Some say the oven is not well temperature controlled, which is why they can’t help overcooking their dishes.

Others say the heating elements and the fan are so powerful that it’s hard to predict when the food will be done.

Additionally, users have had issues with the dials on their appliances. In one case, a customer said the timer was inaccurate and cooked their food for too long.

Others reported dials falling off, and many users reported that Cuisinart customer service was unresponsive or unable to replace individual parts.

The TOA-60 is described as non-stick. However, many people reported this as inaccurate, saying that sticking occurred anyways. Many suggested using a small amount of oil on the inside walls and the pans to prevent a hard-to-clean mess.

What makes that more inconvenient, however, is that the accessories aren’t dishwasher safe. Everything must be washed by hand.

This, in combination with the high temperature of the oven, could be a problem for some users. Burning food often creates a mess, since the food is charred to the surface below.

With the uneffective nonstick surface and the need to wash by hand, mistakes could result in some complicated and time-consuming cleanups.

What is the Cuisinart TOA-60 Best For?

All in all, this product would be best for the chef on-the-go. It can deliver a variety of meals, and fast, which makes it perfect for busy family mornings– or for those calmer family dinners, where you need to multitask in the kitchen.

Those who have guests will also enjoy the air fryer, toaster oven combo, because it'll allow you to dish out a large variety of appetizers rather quickly. Even if you’re just cooking for yourself, the TOA-60 is ideal for frozen dishes such as french fries.

Plus, the air fryer allows you to experiment and fry foods you've never fried before. Essentially, a lover of the kitchen can be a lover of this appliance, if the patience is there.

On top of that, you can cook an endless variety of foods while maintaining a health-conscious diet. A lover of chicken wings or a lover of granola can value this appliance.

The TOA-60 is an all-in-one sort of appliance, with the extra benefit of a healthy air fryer.

The size, speed and temperatures makes it a useful tool for quick cooking, and it’s variety of functions gives it the capability to replace other small appliances in your kitchen.

This is great choice for large families and other avid cookers who will benefit from the appliance strength.

Hey there, I’m Will, and I’ve been smoking and grilling for as long as I can remember. I made this blog to help others who are looking for honest and reliable info from someone they can trust. In my own efforts to try to perfect my smoking and grilling skills, I’ve done a lot of research and would like to have it compiled as a resource for others to use. Happy smoking!